Subscribe for the latest recipes and travel inspiration from Manuela.

Your cart is empty.

Subscribe for the latest recipes and travel inspiration from Manuela.

We have all been down at our house near Tilba on the far South Coast over Christmas and New year. Family and friends were there ,I had a birthday as well – it was a wonderful time. Then on 31st of December everything changed.
We woke at 6.00 am to total blackness. The alarm on my fire-watch app had just gone off. Stepping outside and this is what I saw.

A black sky that melted into red and bright light. You could not tell whether it was sunrise or a fire over the hill. There were no morning bird calls – it was all silent and so strange.
We activated our Fire Plan and evacuated immediately north to Narooma, waking sleeping guests and children and driving through thick smoke. In Narooma we went down to the harbour to be close to water. What would we do if the fire came? Where would we shelter? 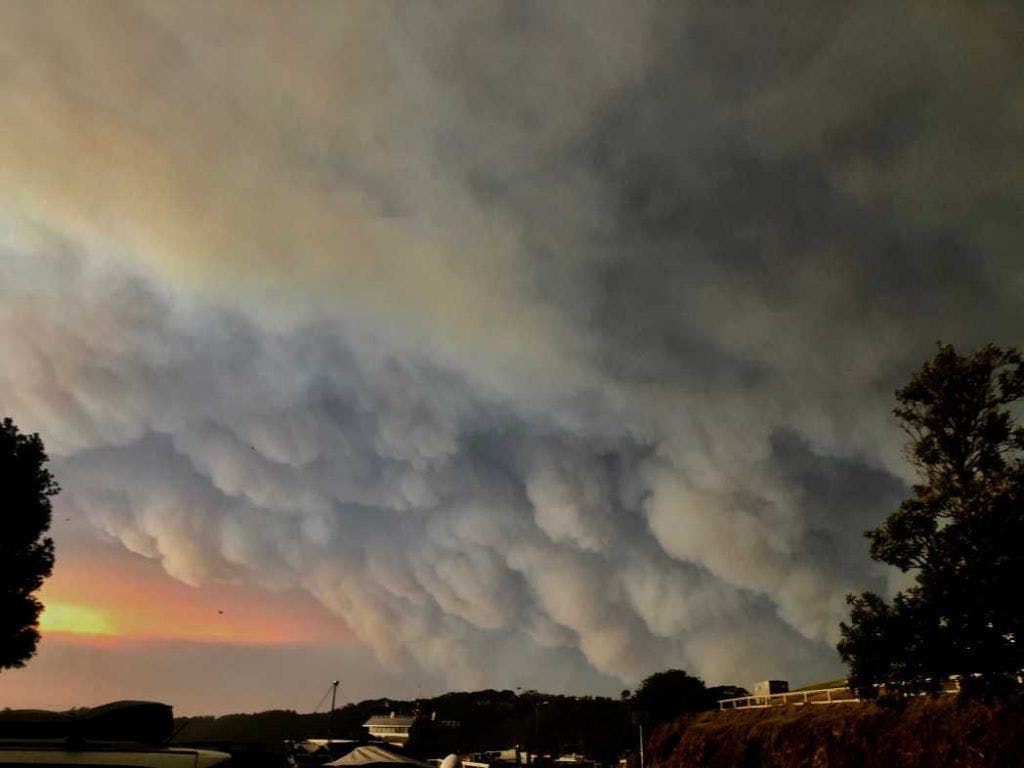 The smoke clouds were approaching quickly. This is what it looked like.
Seeing we had small children with us a generous local couple suggested we shelter in the lobby of their holiday apartment building where there were a couple of couches.
A little later an older lady came by with water and sandwiches for all of us. It was extraordinary how kind people were . Times of crisis can really bring out the best in people. 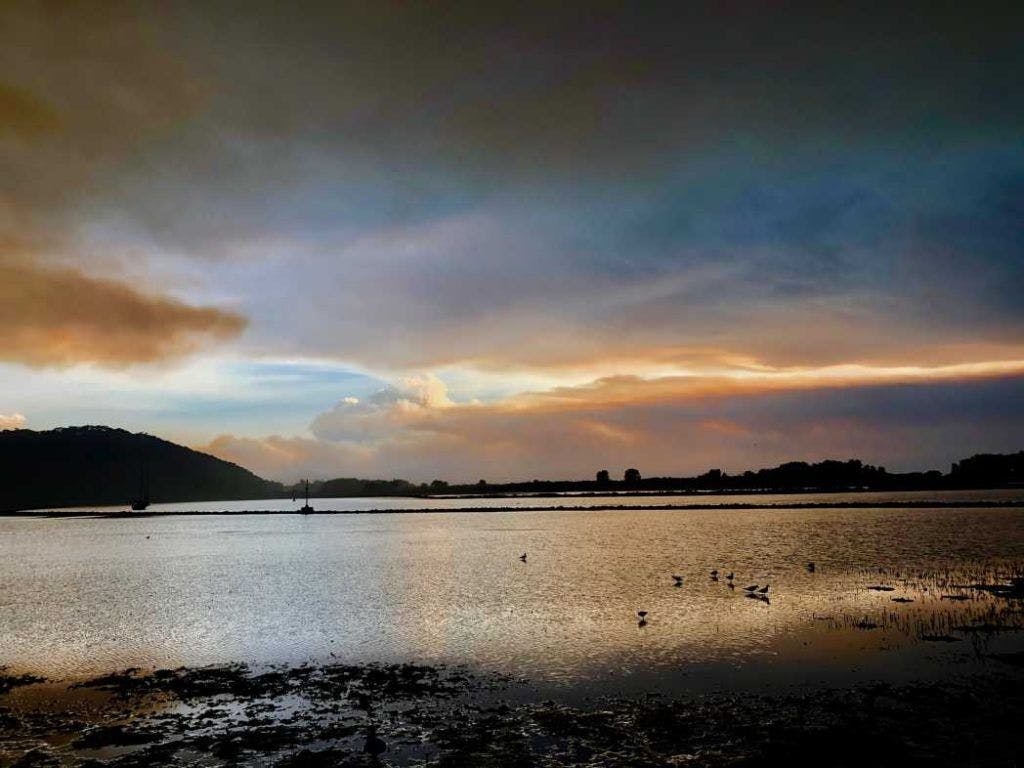 Out to sea, the clouds were shaping like giant mushrooms. Apparently the great heat of the fire generates a mini weather pattern. We even had a few drops of ‘black’ rain. 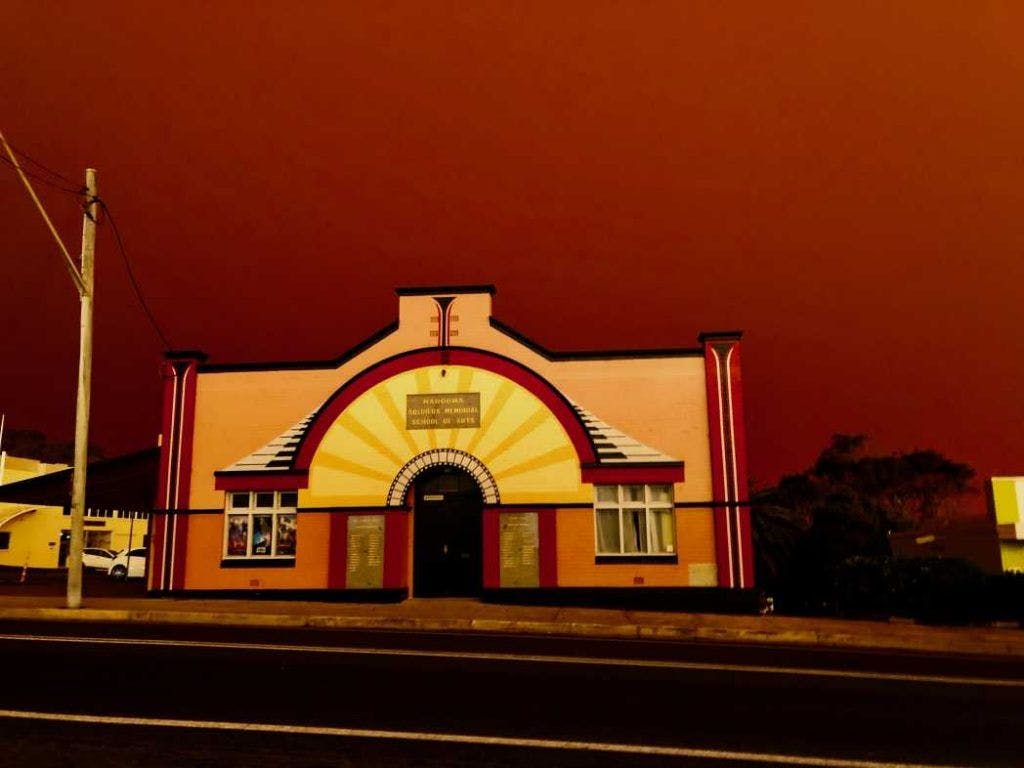 The Kinema in Narooma at 11 am, look at the colour of the sky!!
Later things calmed down a little and some of us decided to return to the house. 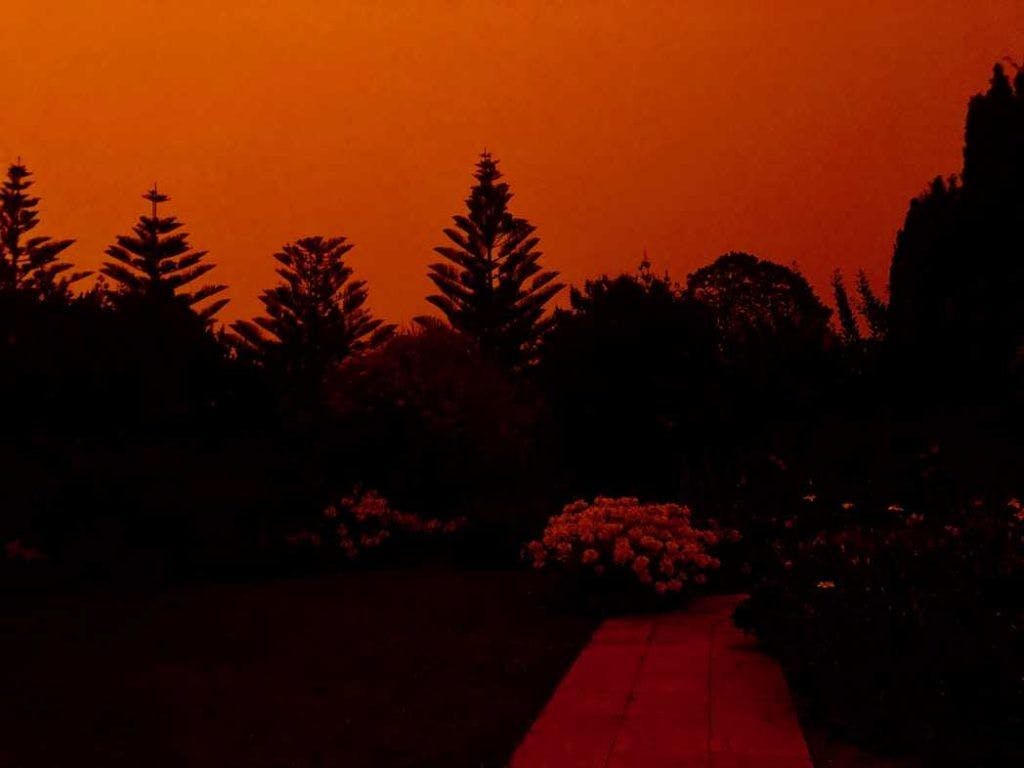 On our return this was the view outside my kitchen with a scary dark red sky.
The lawns were covered with dead embers and black leaves blown from the fires in Cobargo over 20km away.

Mid-afternoon this was the view from our front verandah looking towards the sea.It was really eerie.
I had invited neighbours for New Year’s Eve dinner. The area had lost power but our emergency generator kicked in to give us light and pump water and I cook with gas.
There was a spooky atmosphere but we enjoyed an evening of laughter and good spirit. I prepared my grandfather’s ‘paté di tonno,’ a chicken liver paté and an enormous bouillabaisse with aioli. From the vegetable garden I made a caponatina
For desert I served a delicious panettone, made by Honor of Honor Bread in Bermagui, which I cut and layered with our local Tilba cream.
The next day our generator ran out of fuel so we lost power and all communications were down so, sensibly, everyone decided to leave taking the only open road via Tathra, Bega and then on to Cooma and Sydney – a long trip.
Michele and I decided to stay for the time being and went around all the neighbours making sure everybody was OK and had food. By this time we had no power, water, internet or telephone. The two of us had a quiet candle-lit New Year’s dinner of traditional lentils and ham. The lentils bring you good luck for the year and we might need it.
The next morning a friend of a friend called by to tell us the Rural Fire Service had ordered a general evacuation of the whole area so we packed and closed the house to make it as secure as possible.We had no water so there was little we could do if we stayed.
We drove north up the Princess Highway which was partially open, having to make a few detours through fire- ravaged areas along the way. We were finally blocked at the town of Milton by a fire cutting the highway to the north. The line of waiting cars eventually stretched as far back as Batemans Bay 60km to the south as this was the only way out of the area. We waited 8 hours while emergency crews cleared the road ahead.
The people of Milton were amazing bringing food to the stranded tourists or opening up their houses to use their loos. All the stores in Milton ware closed as they had no water. It was amazing how well everyone stranded there behaved There was no panic or shouting , just patient understanding. There were whole families playing scrabble or drawing with their children on the side of the road.
Finally at nearly 3.00am we were escorted by police, 100 cars at a time, through an active fire zone where the burning embers, tree trunks and hillsides would have been beautiful in the darkness, if they weren’t so scary.
It took us 23 hours to arrive in Sydney for a trip that usually takes 5 hours.

The danger is not yet over with forecast rising temperatures and dangerous winds this weekend. Who knows how long it will take to restore power and communications.
I pray for all the people who are waiting to see if their houses and towns will survive and especially for all those incredible volunteer fire fighters who put their lives at risk for our sake. They give up so much and I hope they get the recognition they deserve and some compensation for the financial sacrifices they make.

Latest recipes and travel inspiration direct to your inbox.